NOTE: You may need to play in full-screen or click slightly below the game window to get the focus on the game instead of on the browser, Unity's WebGL is still in beta.

Mini Quest is a rogue-like made by Freddy Vasquez and is inspired by games such as Diablo 2.

Check out this game on the app store HERE

- Chests are now spawned throughout the levels.

- Items are now auto-equipped on pick-up if it is your first item of that slot.

- Text should be easier to read now.

- Added a "Heal" skill which restores a percentage of your maximum HP.

- Removed the "Hot foot" skill since no one used it.

- The "Fireball" skill now requires an enemy target instead of a position, this helps in case you miss-click.

- You can now wait turns by holding SPACE.

- Music tracks can no longer be played twice in a row.

- Enemies no longer spawn too close to the player.

- All skills now consume the correct amount of mana.

- Actors are now disposed of properly.

- Improved main menu and added option to turn off sounds.

- Removed "story" component from the game.

- Made it clearer when a skill becomes unlocked.

- Ongoing balance of enemies and items.

- Camera no longer interpolates between positions, and got zoomed out a little.

- Ground textures for the cave are now uniform (in case people like it).

- Decreased level requirement of all skills by 1.

- HP is decreased properly from all actors.

- Enemies are no longer rendered for an extra turn after death.

- Improved the look of the menu screens and slightly increased font size.

- Camera is now less jerky than before.

- Increased the fire damage from Fire Hands and removed its physical damage.

- Blocking now negates all damage instead of partial damage.

- Added a boss in the cave (depth 2) that some may find familiar.

- Fire damage now has a 50% chance to burn the opponent.

- Ongoing balance of enemies and items. 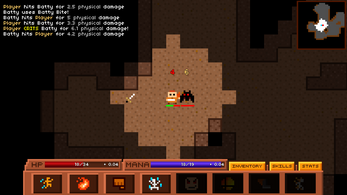 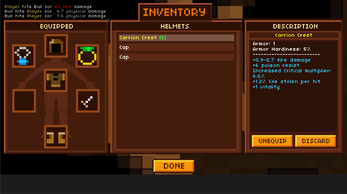 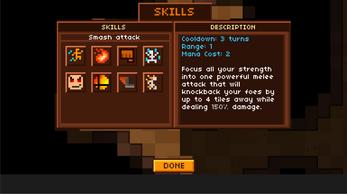